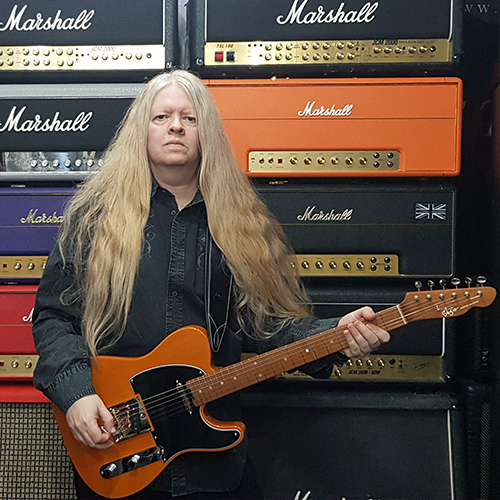 Oz Marshall is multi talented musician born in Liverpool England. His main instrument is guitar, and plays drums,keyboards, bass and sings. and has been playing live gigs since he was 13 and playing in a Rush tribute Justin Eyeball at age 16. He has toured all of Western Canada on many TV shows with his band Snake Eyes which he founded and wrote all the songs and released 3 albums.He has played many Festivals in the Uk and Europe including The Magic Circle Festival with Manowar and many other big bands.  Oz also has a Youtube channel called Guitar Safari which has shown great success and praise in a short period of time, he reviews guitar, pedals, drums and all gear related equipment. Oz has worked with a few small guitar companies as a quality control manager, as he has extensive knowledge of guitars. Oz has a Diploma in Music Production and Sound Engineering, he went to University in London. His band Snake Eyes has released 3cds, The Journey Begins, Soul Stealer and Shockwave. They made several music videos which Oz produced and edited the videos. His influences are Heavy Metal, Hard Rock and blues and alot of acoustic styles of guitar playing.

Oz has had the opportunity to jam with a wealth of talented British and Canadian musicians over the years, including a fellow Canadian, Pete Friesen of Alice Cooper and Les Binks, the original Judas Priest drummer. Oz is a guest musician on a regular basis with Metalworks, which features Ritchie Faulkner(Judas Priest). Oz has also played with Robin Eaglestone (Cradle of Filth), Tony Ritchie and Lionel Hicks (Balance of Power).  On the new Snake Eyes Oz has recruited Shredmaster David Shankle ex Manowar to guest on the cd playing a shred guitar solo on one of the tracks. Oz has also been good friends with Bruce Kulick from Kiss, for many years. They talk often about guitars music and anything guitar related , its nice to get great advice from a pro. Oz also played with Mean Machine and released a few singles and the video, Master I am. He has also worked with David Shankle from Manowar which he is playing on one of the new Snake Eyes tracks from the new cd.

Snake Eyes has, performed all over UK and Scotland Canada and Europe and was featured in magazines such as Kerrang, Metal Hammer, Powerplay, Classic Rock and radio stations such as BBC, Kerrang Radio, Eagle Radio and many more. Oz has also played on Tv in  Canada on the Vtv breakfast show, and in the Uk a few times on Uk unsigned with his band Snake Eyes. He also been interviewed on many Radio stations across the world promoting his music and talking about guitars. Oz is an expert in most guitars and vintage guitars, he has been to Nashville a few times to the Nashville guitar shows and , talked to George Gruhn and Drew Berlin, from the Burst brothers. His knowledge is extensive in all instruments from guitars to amps to pedals etc.